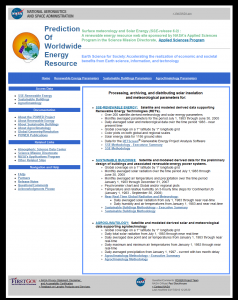 For DSSAT crop models, users can download the data with all variables in ICASA Standards format.

Agricultural research increasingly is expected to provide precise, quantitative information with an explicit geographic coverage. Limited availability of daily meteorological records often constrains efforts to provide such information through use of simulation models, spatial analysis, and related decision support tools. The Prediction Of Worldwide Energy Resources (NASA/POWER) project at the NASA Langley Research Center provides daily data globally for maximum and minimum temperatures and other weather variables on a 1° latitude–longitude grid. The data are assembled from a range of products derived from satellite imagery, ground observations, windsondes, modeling and data assimilation. Daily temperature data from NASA/POWER for 1983 to 2004 for the continental US were compared with data of 855 individual ground stations from the National Weather Service Cooperative Observer Program (COOP). Additionally, a wheat (Triticum aestivum L.) simulation model was used to compare predicted time to anthesis using the two data sources. Comparisons of daily maximum temperatures (Tmax) gave an r2-value of 0.88 (P < 0.001) and root-mean-squared error (RMSE) of 4.1 °C. For minimum temperature (Tmin), the r2-value was 0.88 (P < 0.001) and RMSE, 3.7 °C. Mean values of Tmax, and Tmin from NASA/POWER were, respectively, 2.4 °C cooler and 1.1 °C warmer than the COOP data. Differences in temperature were least during summer months. When data were aggregated over periods of 8 days or more, the RMSE values declined to below 2.7 °C for Tmax and Tmin. Simulations of time to anthesis with the two data sources were also strongly correlated (r2 = 0.92, P < 0.001, RMSE = 14.5 d). Anthesis dates of winter wheat regions showed better agreement than southern, winter-grown spring wheat regions. The differences between the data sources were associated with differences in elevation, which in large part resulted from NASA/POWER data being based on mean elevations over a 1° grid cells vs. COOP data corresponding to the elevation of specific stations. Additional sources of variation might include proximity to coastlines and differences in observation time, although these factors were not quantified. Overall, if mountainous and coastal regions are excluded, the NASA/POWER data appeared promising as a source of continuous daily temperature data for the USA for research and management applications concerned with scales appropriate to the 1° coordinate grid. It further appeared that the POWER data could be improved by adjusting for elevation (lapse rate) effects, reducing seasonal bias, and refining estimation of actual maximum and minimum temperatures in diurnal cycles.