DSSAT is currently listed as one of the greatest accomplishments of the University of Florida/Institute of Food and Agricultural Sciences. Read the full story at here. 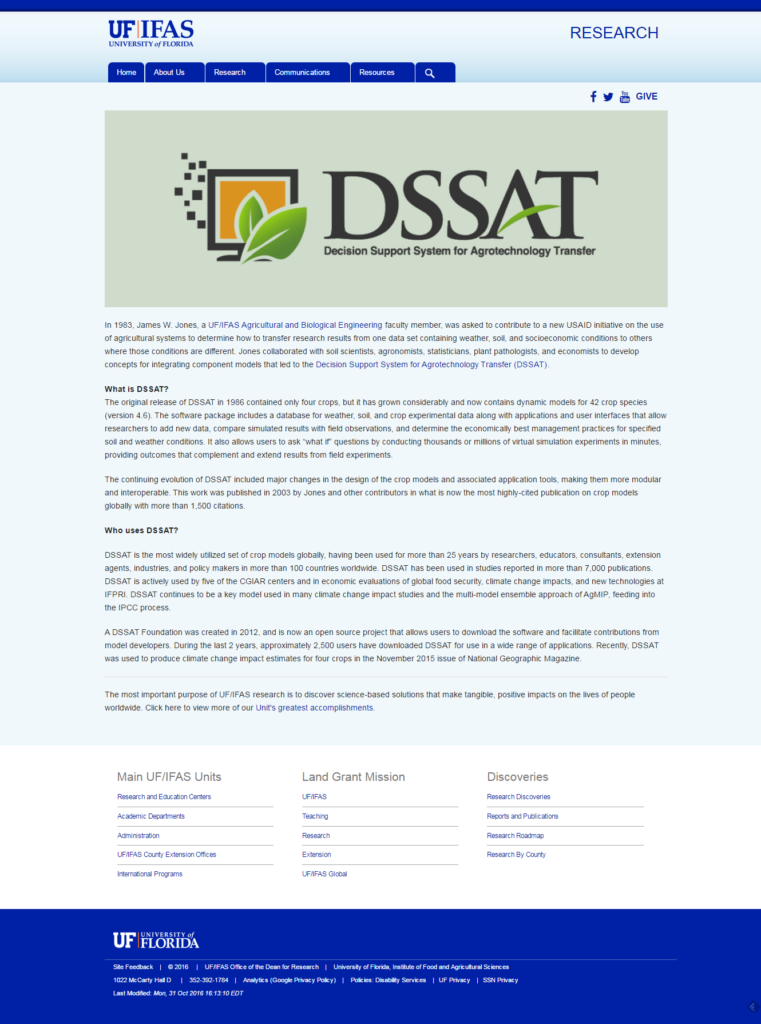 In 1983, James W. Jones, a UF/IFAS Agricultural and Biological Engineering faculty member, was asked to contribute to a new USAID initiative on the use of agricultural systems to determine how to transfer research results from one data set containing weather, soil, and socioeconomic conditions to others where those conditions are different. Jones collaborated with soil scientists, agronomists, statisticians, plant pathologists, and economists to develop concepts for integrating component models that led to the Decision Support System for Agrotechnology Transfer (DSSAT).

The original release of DSSAT in 1986 contained only four crops, but it has grown considerably and now contains dynamic models for 42 crop species (version 4.6). The software package includes a database for weather, soil, and crop experimental data along with applications and user interfaces that allow researchers to add new data, compare simulated results with field observations, and determine the economically best management practices for specified soil and weather conditions. It also allows users to ask “what if” questions by conducting thousands or millions of virtual simulation experiments in minutes, providing outcomes that complement and extend results from field experiments.

The continuing evolution of DSSAT included major changes in the design of the crop models and associated application tools, making them more modular and interoperable. This work was published in 2003 by Jones and other contributors in what is now the most highly-cited publication on crop models globally with more than 1,500 citations.

DSSAT is the most widely utilized set of crop models globally, having been used for more than 25 years by researchers, educators, consultants, extension agents, industries, and policy makers in more than 100 countries worldwide. DSSAT has been used in studies reported in more than 7,000 publications. DSSAT is actively used by five of the CGIAR centers and in economic evaluations of global food security, climate change impacts, and new technologies at IFPRI. DSSAT continues to be a key model used in many climate change impact studies and the multi-model ensemble approach of AgMIP, feeding into the IPCC process.

A DSSAT Foundation was created in 2012, and is now an open source project that allows users to download the software and facilitate contributions from model developers. During the last 2 years, approximately 2,500 users have downloaded DSSAT for use in a wide range of applications. Recently, DSSAT was used to produce climate change impact estimates for four crops in the November 2015 issue of National Geographic Magazine.