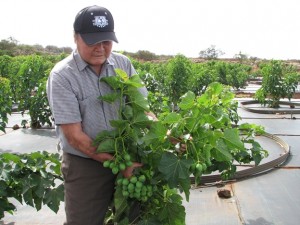 Goro Uehara, a Fellow of SSSA, ASA, CSSA and the American Association for the Advancement of Science and an internationally acclaimed soil scientist who served as Professor, Department of Tropical Plant and Soil Sciences, College of Tropical Agriculture and Human Resources, University of Hawaii, died on January 2, 2012.

Born in Hawaii, Uehara earned his B.S. and M.S. degrees from the University of Hawaii and his Ph.D. from Michigan State University. He served the University of Hawaii from 1959 to 2011. Uehara’s accomplishments in integrating basic soil science research to achieve production and environmental targets in agricultural sciences were indeed pioneering. An early milestone was a book entitled “The mineralogy, chemistry, and physics of tropical soils with variable charge clays”, published in 1981. Apart from research on mineralogy, chemistry, and the physics of soil with variable charge clays, Uehara was a lead scientist with the following international projects supported by the U.S. Agency for International Development (USAID), the Benchmark Soils Project (1974-1983), the International Benchmark Sites Network for Agrotechnology Transfer (IBSNAT) Project (1983-1993), the TropSoils Project/Soil Management CRSP (1984-2007), and a technical assistance and capacity building grant in East Timor (2003-2006). Uehara’s latest research program (2006-2011) focused on investigating the feasibility of producing clean, renewable energy in the tropics.

Uehara directed thesis studies for 34 graduate students and served on thesis committees for another 100 graduate students and was honored by University of Hawaii as its Outstanding Alumnus. And throughout, Uehara very generously gave back to his field of study. For example, several years ago, Uehara established the Carolyn and Goro Uehara Scholarship for Women in Agriculture to improve educational opportunities for women in agricultural science and technology. He is survived by his wife, Carolyn; his sons, Keith and Jeff, and daughters Sandra and Diana, and 8 grandchildren.

Uehara will be inurned at the National Memorial Cemetery of the Pacific. He was a veteran of the U.S. Army during the Korean War. Anyone wishing to donate in Goro Uehara’s name can do so, writing a check to the UH Foundation specifying that it is for the Goro Uehara scholarship fund.

Professor, University of Florida
View all posts by Gerrit Hoogenboom →