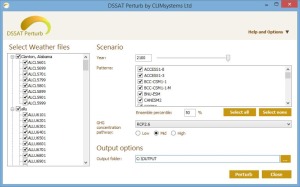 With the encouragement from those at DSSAT (Decision Support Systems for Agrotechnology Transfer) we developed a standalone version of SimCLIM 2013 technology devoted entirely to the perturbation of the key variables driving DSSAT crop models: minimum and maximum temperature, precipitation and solar radiation. The data available for climate modelling has grown enormously. The team at CLIMsystems has processed the data for the world and presented the data in one easy to use package called “DSSAT Perturb”. This tool brings the very latest CMIP5 climate models (40 in total) for application with DSSAT. We have included the latest representative concentration pathway options and also a utility for the easy creation of ensembles of models as recommended by the IPCC. Have a look and download the product from our website.