Original by Kay Ledbetter, October 13, 2021. Kay Ledbetter is an associate editor/senior writer/media relations specialist for Texas A&M AgriLife. She is responsible for writing news releases and feature articles from science-based information generated by the agency across the state, as well as the associated media relations. 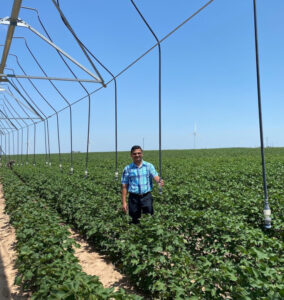 College Station, TX (October 13, 2021) – With crops, farmers will adapt — they always have and always will. To help this adaptation, however, a Texas A&M AgriLife research project has used artificial intelligence modeling to determine what traits cultivars will need to be successful under changing climate conditions.

The project’s other goal was to help extend the life of the Ogallala Aquifer. Safeguarding the aquifer will require understanding how crops adapt to future cropping practices, especially since climate change predictions indicate summers will be warmer and dryer in the future.

Toward these goals, a Texas A&M AgriLife team has completed an assessment of climate change impacts on cotton yield and irrigation water use. “Potential genotype-based climate change adaptation strategies for sustaining cotton production in the Texas High Plains: A simulation study” is published in the international Field Crops Research journal.

“We know there are declining water levels, and already the groundwater conservation districts are putting restrictions on how much farmers can pump and use,” Ale said. “There are concerns farmers may have to eventually transition from irrigated to dryland agriculture to conserve the Ogallala Aquifer.”

“Dr. Ale has a worldwide reputation as a leader in resilient agriculture in response to climate change,” said Rick Vierling, Ph.D., Texas A&M AgriLife Research and Extension Center director, Vernon. “He’s worked in many crop species — sorghum, wheat and cotton — which provides for a much broader, resilient research program for climate adaptability.”

Ale said the team’s goal was to look into the future, based on global climate model projections, and determine: How are cotton yields going to change under the future scenarios? And how might those potential yields vary across the High Plains, from north to south?

The project’s models described crop growth, development and yield as a function of weather conditions, soil properties and crop management practices. These dynamic models use fundamental mechanisms of plant and soil processes to simulate crop growth and development.

“We know the temperature increases from north to south, and the precipitation decreases moving from east to west, so we studied the cultivars that the producers are using currently,” Ale said. “We used a crop model to see how the cultivars will perform under future conditions because conducting field experiments simulating climate change impacts is very difficult.”

In the project, cotton growth and yield were simulated under irrigated and dryland conditions at three locations in the High Plains region — Bushland, Halfway and Lamesa — under 18 future climate scenarios.

The model was trained using Bordovsky’s datasets of historical data collected since 2011. The crop growth models are complementary to field experiments and must be evaluated based on the measured data from the field before they can be used in any application.

Evaluated in this study, relative to the reference cultivar, were:

The crop model allows input files to be added about the cultivars and the opportunity to change the parameters. For example, one way to enhance drought tolerance would be by modifying the root characteristics in the model. In drier conditions, a plant starving for water will send its roots deeper into the soil to get water. So, the model can examine what difference expanding the root system makes on withstanding the drought stress.

“Let’s say we were trying to see how the cultivar characteristics focused on drought resistance can be enhanced to overcome the negative effects of climate change — will a high-yielding variety do better, or one that is heat tolerant? We use the model’s capabilities and hypothetically simulate those virtual cultivars and then try to see their performance in comparison to the reference cultivar,” Kothari said.

The simulations helped the researchers make the following projections:

“We tested six virtual cultivars for their resilience to climate change based on their yield and seasonal irrigation water use relative to the reference cultivar,” Kothari said.

The high-yielding cultivar, characterized by higher potential leaf size and increased partitioning to seed plus shell, was desirable for irrigated cotton production. The long-maturity cultivar, with earlier flowering and longer reproductive duration, was found suitable for dryland cotton production. Heat-tolerant cultivars would be another safe choice, especially for the warmer southern High Plains region.

Planning for the future

The evaluated models can help assess the climate change impacts on aspects of crop production such as crop yield, irrigation water requirement and water-use efficiency. Breeders can use that information to work toward the future.

“This study is useful to the breeders as they develop new cultivars,” Ale said. “They can take these guidelines and then focus on the cultivars expected to do better under the future climate scenarios.”

Also, he said, from the producer’s point of view, this information is useful for planning resources with climate change impacts in mind. For example, in the southern region, where the sandier soils are, crop performance is slightly different from northern areas of cotton production, and breeders can begin making those adjustments.

The study’s results are also applicable to agronomy. For example, producers can time their planting so that the plants’ critical stages will not occur during the highest temperature times.

“There are uncertainties involved in simulations, but these ideas will give both breeders and producers some guidance — some idea on how agriculture is going to be in the future and what can we do to adapt to it,” Ale said.

Professor, University of Florida
View all posts by Gerrit Hoogenboom →