If you are attending the ASA-CSSA-SSSA 2022 International Annual Meeting in Baltimore, Maryland, come and join us at the DSSAT Open Forum where we will exchange what’s new on crop modeling research, collaboration opportunities, and development on data and tools. 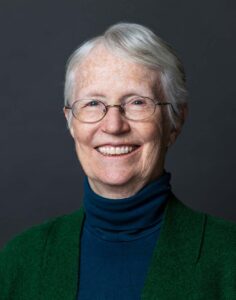 Dr. Cynthia Rosenzweig of the United States will receive the 2022 World Food Prize for her seminal contributions to understanding and predicting the impacts of the interaction between climate and food systems. Through designing and leading rigorous, collaborative observational and modeling research, she provided the evidence used by thousands of decision-makers in more than 90 countries to both mitigate and adapt to climate change in local, national and global food systems.

Improvement and Application of Agroecosystem Models: The DSSAT experience

Presented by Gerrit Hoogenboom during the Symposium – 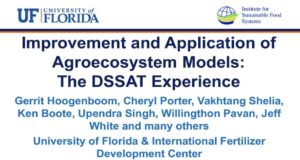 “Improvement and Application of Crop Growth and Agroecosystem Models for Knowledge Advancement and Sustainable Development” as part of the 2021 ASA-CSSA-SSSA Annual Meeting held in Salt Lake City, Utah, USA 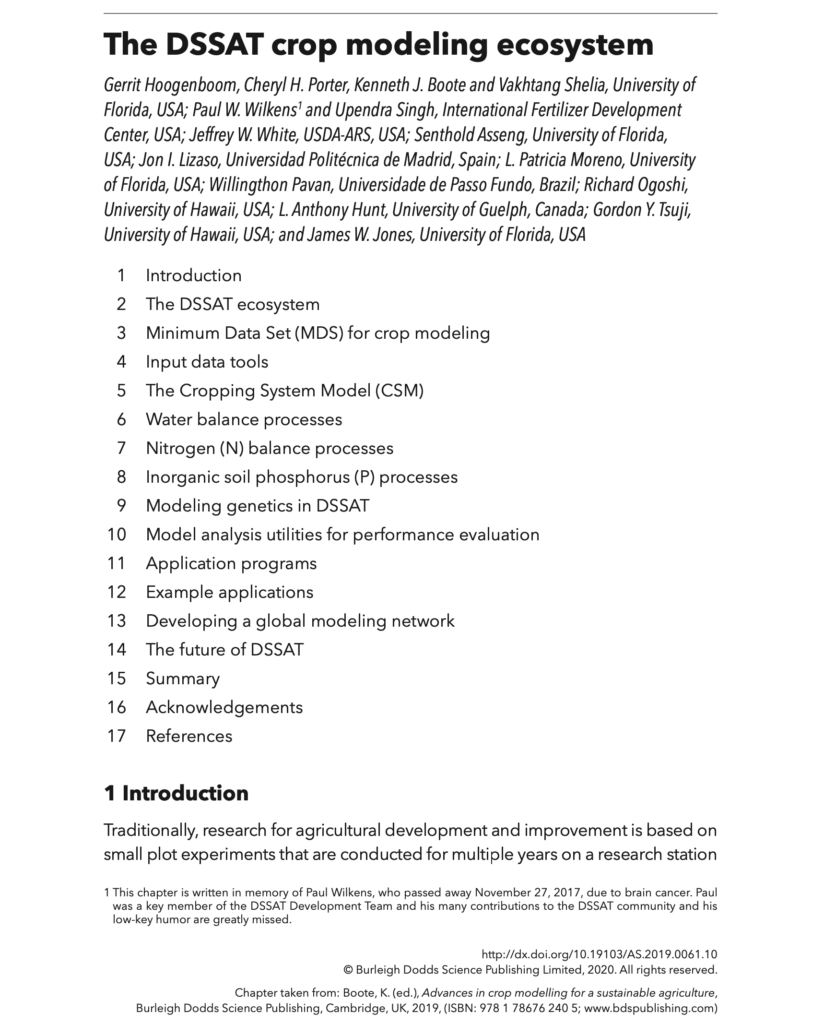 The DSSAT crop modeling ecosystem is one of the oldest and most widely used crop modeling platforms across the world. The success of DSSAT is based on the inclusiveness and participatory approach that has been used since the original development of the CERES and CROPGRO family of models and the emphasis on sharing data and model code. DSSAT is not just a software program, but an ecosystem of:

Download the chapter in PDF More info/buy the book

Advances in crop modelling for a sustainable agriculture 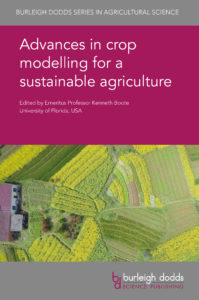 This collection summarises key advances in crop modelling, with a focus on developing the next generation of crop and whole-farm models to improve decision making and support for farmers.
Chapters in Part 1 review advances in modelling individual components of agricultural systems, such as plant responses to environmental conditions, crop growth stage prediction, nutrient and water cycling as well as pest/disease dynamics. Building on topics previously discussed in Part 1, Part 2 addresses the challenges of combining modular sub-systems into whole farm system, landscape and regional models. Chapters cover topics such as integration of rotations and livestock, as well as landscape models such as agroecological zone (AEZ) models. Chapters also review the performance of specific models such as APSIM and DSSAT and the challenges of developing decision support systems (DSS) linked with such models. The final part of the book reviews wider issues in improving model reliability such as data sharing and the supply of real-time data, as well as crop model inter-comparison.

Cross-continental collaborations facilitated by the CGIAR Platform for Big Data in Agriculture thrive to beat back the threat of wheat blast in Brazil and Bangladesh.

Wheat blast disease is a major threat to smallholder farmers. The disease was first discovered in Brazil in 1985. Dec 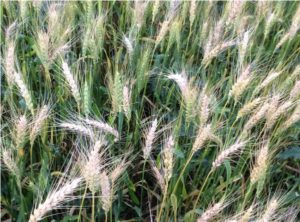 ades later it escaped from South America when it crept its way across the ocean and appeared in Bangladesh in 2016. Wheat blast outbreaks are linked to the right climate conditions. More accurate weather forecasts, coupled with disease models are key for farmers to adapt to the threat of the disease. Effective forecasting and warning systems can also help farmers avoid unnecessary fungicide use, thereby saving them money and reducing environmental risks.

Because the disease is new, knowledge of wheat blast epidemiology and modeling was limited in Bangladesh. That’s why scientists at the International Maize and Wheat Improvement Center (CIMMYT) reached out to Professor Jose Mauricio Fernandes, a Crop Pathologist, and Mr. Felipe de Vargas, a Computer Scientist, within the Universidade de Passo Fundo (UPF) in Brazil… Read more… 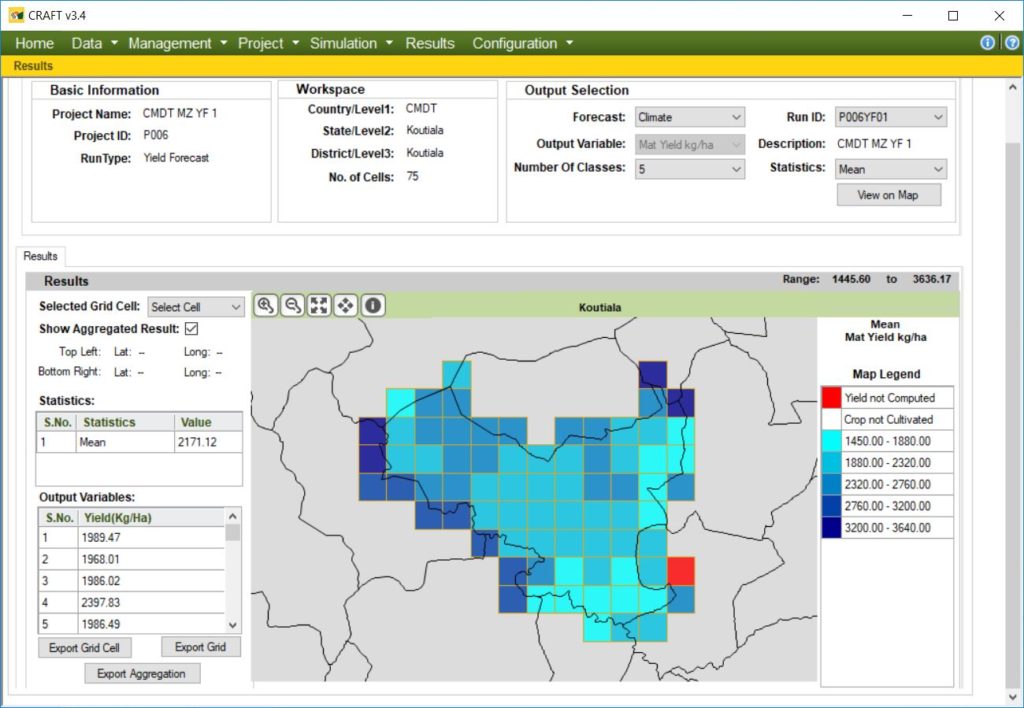 The CCAFS Regional Agricultural Forecasting Toolbox (CRAFT) is a software platform designed for yield forecasting at spatial resolutions of either 5 or 30 arc-minutes using an ensemble modeling approach. Currently the DSSAT, APSIM, and SARRA-H crop simulation models have been implemented for nine important food and feed crops using the AgMIP IT tools. CRAFT was an initiative of CCAFS and was developed in partnership with the Asia Risk Center, Washington State University, and the University of Florida. 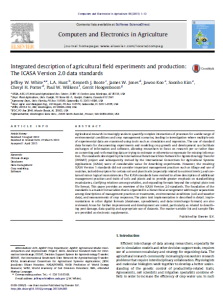 The new book gives a detailed description of the application of DSSAT in simulating crop and soil processes within various Agro-ecological zones in Africa. The book provides examples of the application of DSSAT models to simulate nitrogen applications, soil and water conservation practices including effects of zai technology, phosphorus and maize productivity, generation of genetic coefficients, long-term soil fertility management technologies in the drylands, microdosing, optimization of nitrogen x germplasms x water, spatial analysis of water and nutrient use efficiencies and, tradeoff analysis.

The DSSAT Foundation will be sponsoring the 24th Annual Open Forum on Crop Modeling and Decision Support Systems during this year’s ASA-CSSA-SSSA 2021 International Annual Meeting. The forum is scheduled for Monday night, November 8, 2021, from 7:30 – 9:00 pm in Room 151 DEF of the Salt Palace Convention Center in Salt Lake City, […]

Original by IFDC Staff | August 9, 2021 From July 26 to July 30, 2021, IFDC hosted the 15th Decision Support System for Agrotechnology Transfer (DSSAT) Development Sprint.  The development sprint had three goals: improve DSSAT and its associated tools and databases; provide a forum for communications and information exchange among developers, users, and others interested in modeling and […]

During the last week of July the first “Hybrid” DSSAT Development Sprint was held, hosted by Dr. Upendra Singh and Dr. Willingthon Pavan at the International Fertilizer Development Center in Muscle Shoals, Alabama. In-person participants included five representatives from the University of Florida and three representatives from IFDC, while there were around 18 on-line participants […]

Original by Ashley N Biles for CAES News Anyone familiar with agriculture knows that a successful harvest largely relies on environmental factors. An especially hot summer with no rain in sight or poor soil quality can cause as many problems as a late cold snap right in the middle of planting season. Often farmers must rely on trial […]

DSSAT 2021 International Training Program at the University of Georgia

DSSAT Foundation – The University of Georgia – Griffin Campus, Griffin, Georgia USA Scientists from across the world met from May 17-22, 2021 on the University of Georgia Griffin Campus to learn about the latest version of the Decision Support System for Agrotechnology Transfer (DSSAT) computer software program. The DSSAT crop modeling ecosystem helps researchers […]